Home / Pilot Proficiency / I.L.A.F.F.T / I Learned about Flying from That: Vanishing Earth

This is an old story, but it’s one I still think about often. In January 1960, I found myself in the right seat of an 85 hp Luscombe 8F on top of a thick layer of smog blanketing the infamous Los Angeles basin, the setting sun perilously close to the western horizon. The pilot, my dad, known for his casual attitude toward the weather, had pushed our return flight from Oakland beyond the limit of our combined abilities.

Although I had first soloed just two weeks before, my dad had literally grown up in the aviation industry. In his teens he built a glider and worked with aviation pioneer Glen Martin. World War I changed his career path, but in 1938 he took up flying. Typical of him, Dad soloed himself when his instructor failed to show up for that crucial lesson. He then managed to accumulate 370 hours in his Luscombe 8A before World War II shut down all general aviation flying within 100 miles of the Pacific coast.

Dad naturally wanted to witness my first solo flight. When he heard that our flying club had a Luscombe he decided to join and get back into the air. Although he had logged only 20 hours in the previous 19 years, at age 66 he checked out in just three hours dual. Now he wanted to spread his wings again, and talked me into flying with him to visit a friend in Oakland. Having flown with him as a child, I couldn’t refuse.

Our flight up was rather uneventful, and Buchanan Tower provided a green light to our nonradio aircraft as we entered the downwind leg. Dad’s flawless three-point landing erased any doubts as to his ability to fly cross-country. After all, he had flown a 65 hp Luscombe from Southern California to Chicago and back in 1940. Yes, he told of some harrowing events, such as when tall weeds, wrapping around the wheels during a takeoff run from a hilltop grass field, held him on the ground until he literally ran off the end of the runway and into the air.

We spent the night with Dad’s friend and didn’t get to start our return flight the next day until early afternoon. The Los Angeles weather was reported as ceiling and visibility unlimited, with light “haze and smoke,” their euphemism for smog. So off we went.

We made a stop at Fresno for a short tank-topping break, then took off again, following Highway 99 south. With full fuel it took max power to climb over the Grapevine Pass, and it was there that the ground started disappearing. The winds that afternoon had blown the accumulated smog up into the mountains north of L.A., and visibility quickly deteriorated below VFR minimums. With the low sun reflecting off of the top of the haze, we soon lost contact with the ground.

So here is where my thoughts started tormenting me. I had read all about VFR pilots flying into IFR conditions in Flying magazine and knew that we were in a dangerous situation. The sun set below the horizon, and daylight turned to dusk. Dad had never flown, much less landed, at night, so our options were quickly fading. Dad then recalled that it was rarely smoggy in the desert, so we made a left turn to 090. He was right. After a few miles we were able to see the ground, hilly as it was. I was staring straight down, knowing that the dusk was getting darker and even if we made it out of the smog we may have to set down in total darkness — an unpleasant prospect.

Suddenly, I saw what looked like a paved drag strip in the middle of nowhere. Dad recognized it as a private airport and started a descent. The good news was that it was 6S Ranch Airport near Saugus. The bad news was that it had been used for parachute jumping that afternoon and the active runway marker was set to point out the wind direction across the adjacent field — and that is what Dad used to set up our landing approach.

Dad was nervous. He maintained a rather hot 90 mph on final. About 100 feet off the ground I recognized that the paved runway was to our left and suggested a go-around. Dad, determined to salvage what could have been a doomed flight, yelled back, “We are going down here and now!”

I braced my hands on the exposed tubing in front of the windshield as we settled on what was an alfalfa field with irrigation dikes every 40 feet. A loud bang reverberated through the sheet-metal fuselage as the first dike folded our main landing gear. The nose plowed the ground for the next 160 feet and the left wing crumpled, rolling the cabin as we came to a sudden stop.

I had been braced for the hard landing, but Dad, with his hands on the controls, had put a big dent in the control panel with his head and was out cold. I opened the right-hand door, climbed out and sat down on the cool grass, breathing in the fact that we had survived. I swore to myself I’d never go up in a light plane again.

Moments later, a Jeep approached, bounding over the dikes. When it parked next to our mangled airplane, a buxom woman in her early 30s climbed out and told me to stay put while she helped my awakening dad climb up and out the right door from the left seat.

In a half stupor and finding his arm around an attractive lady, my single dad went into full flirting mode. He described how he had been knocked out by a mugger and dreamed that he had been flying with his son and got lost in the smog. She got him to lie down on the ground next to the plane, and as he slowly regained full consciousness, he quietly groaned, “It wasn’t a dream, after all, was it?” Other than a mild concussion, he was OK.

The next week was spent correcting the damage we had caused. The rebuildable Luscombe plus $1,400 bought the flying club a used rag-wing Cessna 120. It came complete with an electrical system, including a coffee-grinder Narco comm radio with six transmitting crystals. That became my solo cross-country bird.

My flight instructor talked me into taking the Aeronca Champ that I had recently soloed to 6S Ranch. This time I landed on the paved runway, which was only 1,800 feet long. When I saw the obstructions, a 100-foot hill on one end and power lines across the other, I figured the rough field landing in the dark dusk may have been our best option after all.

Dad never flew as PIC again. Six months later, I earned my license and he became my passenger.

Lesson Learned on a Flight in Unfamiliar Territory 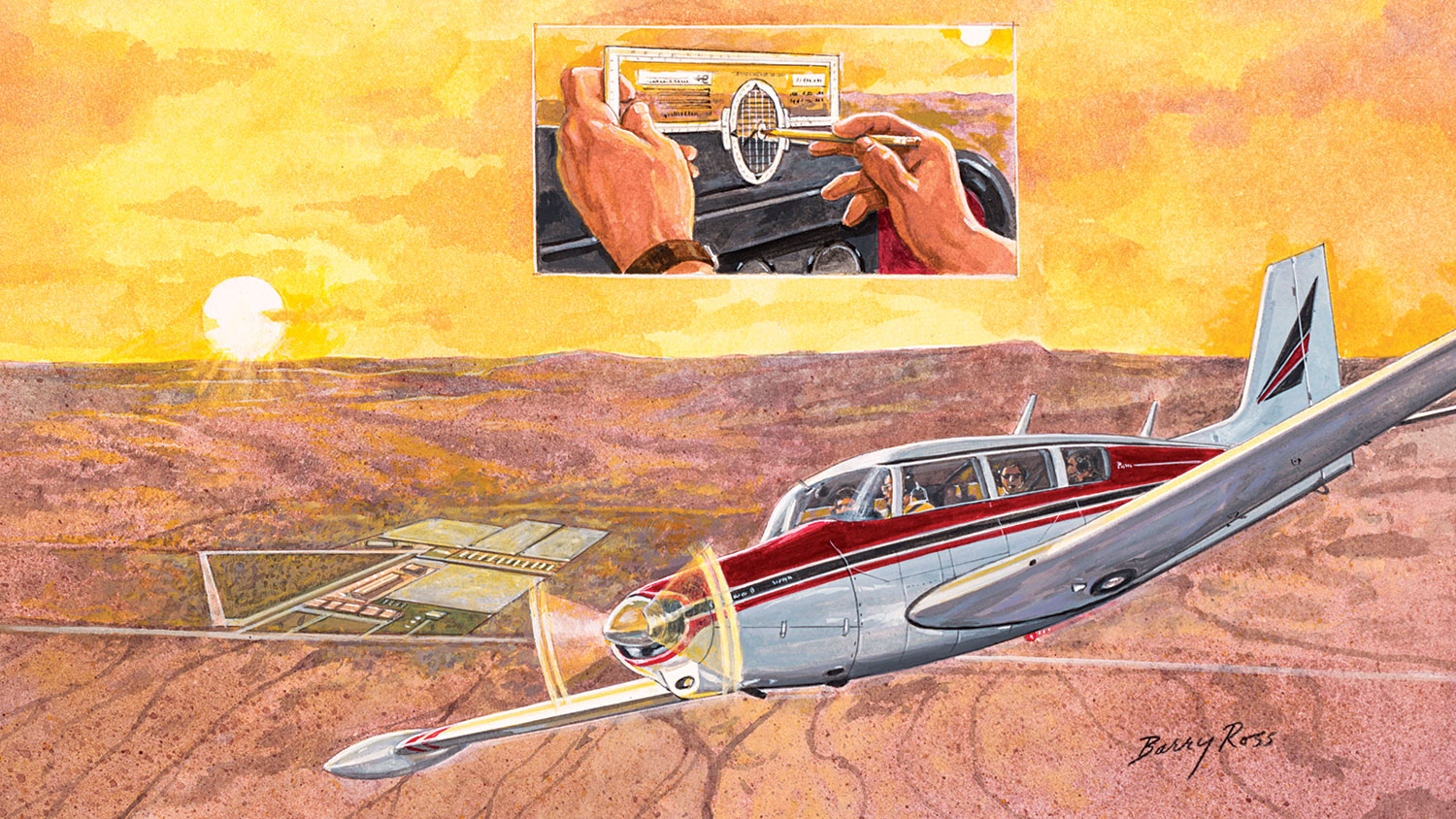 I Learned about Flying from That: Close Call