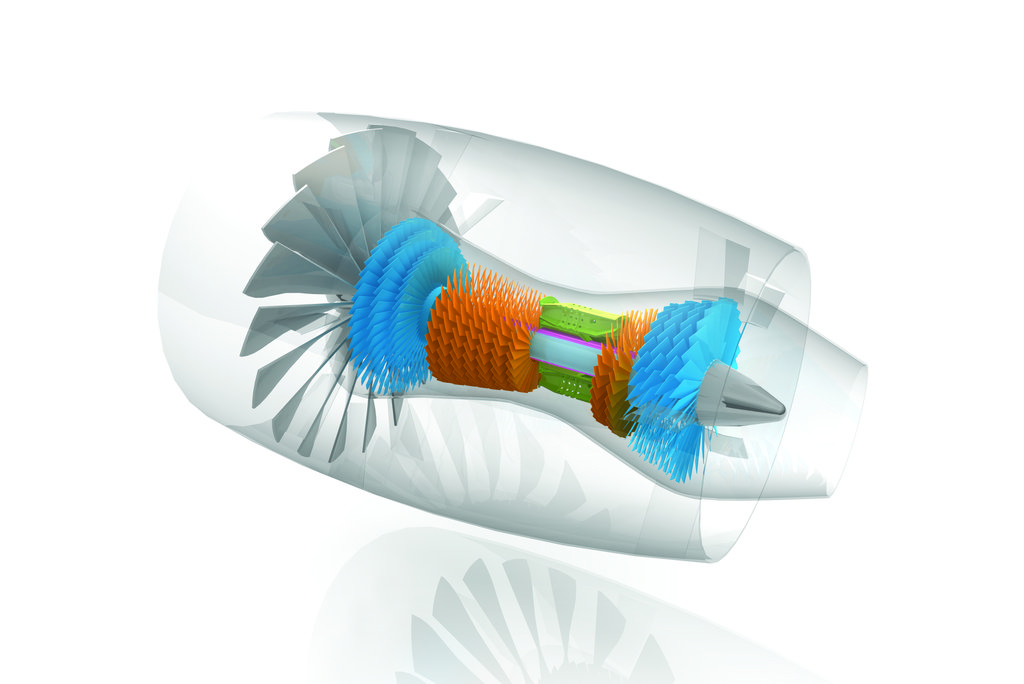 Take a close look at the inner workings of a modern turbofan engine and you’ll discover a marvelous network of parts that puts Newton’s second law of motion to work with elegance and surprising simplicity, allowing today’s jets to go farther on less fuel while making less noise and emitting lower emissions. Here’s how a turbofan works:

STEP 1: SUCK Thrust creation begins at the inlet where a large-diameter fan rotates thousands of times per minute, taking in massive amounts of air. How much air are we talking about? Enough that a high-bypass turbofan engine like Pratt & Whitney’s PW4000 series could suck up all the air in a four-bedroom house faster than you could count to one.

The air passing through the fan then takes one of two routes. Some of the air makes its way to the combustor, where it undergoes the fuel ignition sequence, while the majority of the air bypasses the core and enters a narrow fan duct where its speed increases before exiting at the rear. The accelerated air leaving the turbofan engine can provide up to 80 percent of the overall thrust.

STEP 2: SQUEEZE The remaining airflow enters the low- and high-pressure compressors where it passes through a series of rotating and stationary blades. During this stage, as the air is squeezed, the air-pressure ratio can reach 40-to-1 while air temperatures rise several hundred degrees.

STEP 3: BURN This high-pressure air then moves into the combustor, where fuel is added and the mixture is ignited. The resulting energy spins both the high- and low-pressure turbines, which are connected concentrically via shafts to the compressors and the fan at the front of the turbofan engine. As the turbines turn, so do the fan and the compressors, creating the engine’s continuous process of air intake and expulsion.

STEP 4: BLOW After powering the turbines and decreasing in pressure, the air moves to the exhaust assembly and exits the engine, providing the remaining thrust. The ratio of air that enters the fan and bypasses the core versus the air that enters the compressor is aptly referred to as the bypass ratio. Early turbofans typically had bypass ratios between 1 and 2, but today’s ratios are higher. For example, the Rolls-Royce AE 3007 that powers Cessna’s Citation X+ features a bypass ratio of 5-to-1.