The Grand Bahamas Inter- national airport (MYGF) in Freeport, Bahamas, a privately owned facility, is frequented by nearly a dozen airlines including Delta, Delta Connection, American Eagle, Silver Airways and Bahamasair operating a variety aircraft types. Because tourism is the primary economic driver, be on the lookout for plenty of aircraft in the area from the neighboring islands as well.

With Freeport only 94 flying miles from Fort Lauderdale, Florida, and 86 nm from West Palm Beach, Florida, the overwater portion of the trip in most any aircraft is tantalizingly short, but not so short that single-engine aircraft should travel without life rafts and flotation gear. 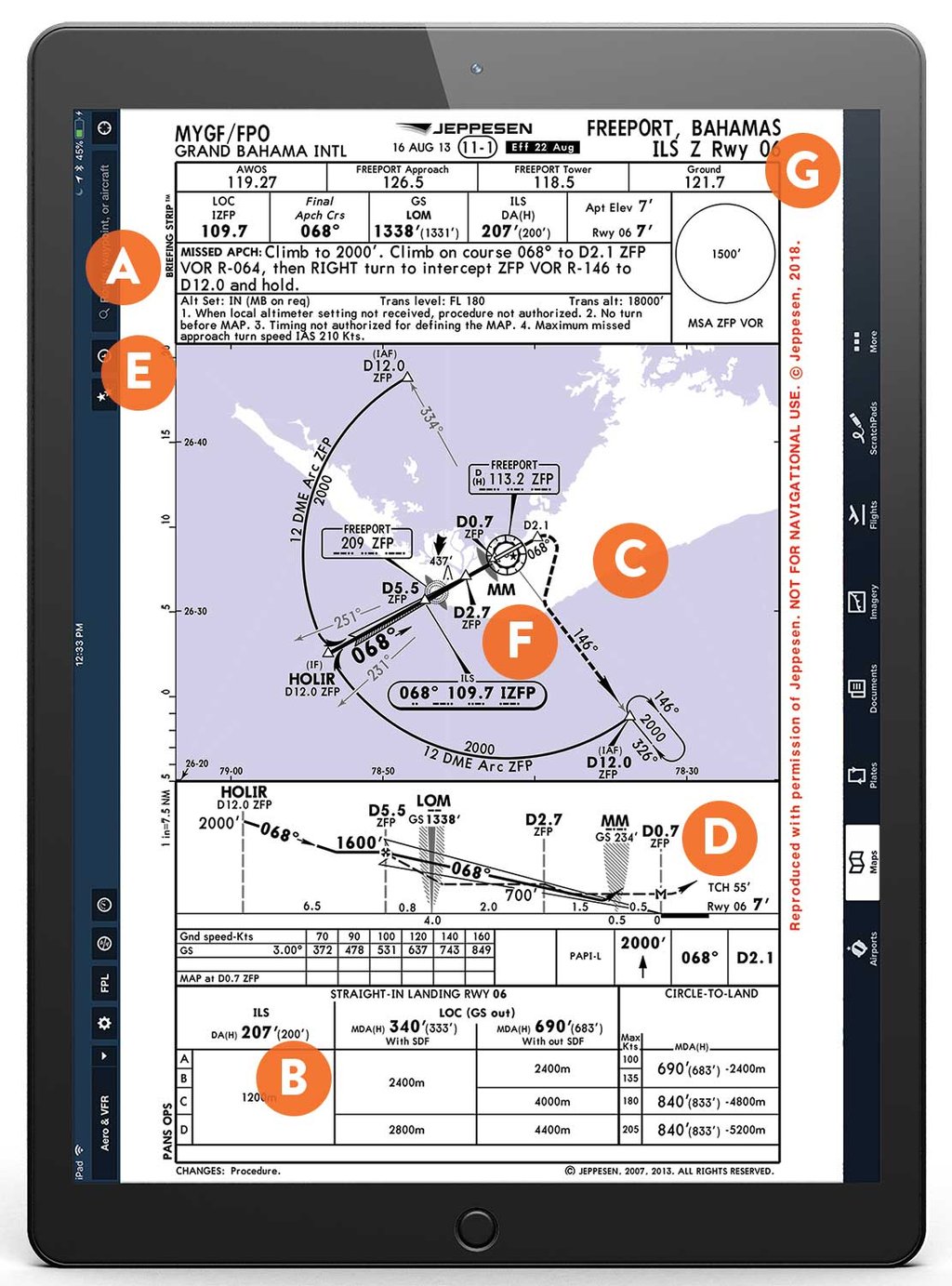 A. No Local Altimeter The first major note is an important one for those operating on an IFR flight plan. Unless the pilot is able to pick up a local Freeport altimeter setting, this approach is not authorized, not even as a localizer only procedure.

B. Visibility/RVR Outside the United States, approach plates use a metric scale. That means visibility requirements are displayed in meters, not statute miles. The metric scale is confirmed by the “m” in the minimums box. Visibility is the only measurement that changes. Heights on the approach for intercepts, stepdowns or missed-approach points, for example, are still listed in feet, with altimeter settings shown in inches of mercury.

C. MAP Turn Beyond the Airport In the event of a missed approach, climb at the normal rate, but do not begin any turns until the aircraft is 2.1 DME beyond the airport to intercept the ZFP 146-degree radial to the hold pattern at the 12 nm DME point southeast. An early turn could bring an aircraft dangerously close to obstacles on the ground, so climbing straight to 2,000 feet is critical.

D. Multiple Missed Approach Points The missed-approach points on this approach depend on whether the pilot is executing the ILS or the LOC procedure; each is different. When flying a full ILS, the aircraft will reach the middle marker at the same point as the glideslope’s decision altitude. As a LOC-only approach, the missed approach is actually slightly closer to the airport, at 0.7 nm DME from the ZFP VOR. Also be aware that during a missed approach, the aircraft may not exceed 210 kias in order to remain within protected airspace.

E. DME might be Required Although no notes indicate DME is required, it would be, depending upon how the approach is flown. During a full ILS, no DME is required; however, during a localizer approach it would be needed because there is no other way to identify the MAP. That’s why Note 3 states, “Timing not authorized for defining the MAP.” DME would also be needed to fly the missed-approach procedure.

F. DME Measured from the VOR Because DME is an important element of this approach, it is critical to be certain to understand that distances are either measured from the Freeport VOR (ZFP) or from along the localizer, in which case they’d be marked as “IZFP.” Receiving accurate DME requires ensuring the receiver is correctly tuned to either the VOR or the localizer.

G. GPS Databases Pilots headed to the Caribbean also must be certain their GPS databases are not simply up to date, but also include the airports in that region. Standard Continental U.S. subscriptions often do not include these airports, even though they’re located less than 100 miles from the mainland. Some providers offer a one-time download of the necessary data. Caribbean coverage must also be added to databases for tablet-based aviation apps in order to access charts and airport information.