We took off from Camarillo under calm, clear blue skies. The hillsides along the coast of Southern California displayed a panoply of colors — bright-green grasses mixed with expansive patches of purple, yellow and orange flowers. The last time I was in Camarillo in a Lancair Evolution, the airplane had a big Pratt & Whitney PT6A up front and the hills were brown. During this flight, it was not just the view that was significantly different.

The sleek, four-seat composite bird I was strapped into had a piston engine, albeit a powerful one. Lycoming Engines’ 350 hp Integrated Electronic Engine, or iE2 for short, was mounted to the airframe several years ago, but cooling issues prevented its introduction. With modifications to solve those issues now in place, Lancair is ready to officially bring the airplane to market.

The Lancair family of sleek composite airplanes has its roots in the mid-1980s, when Lance Neibauer introduced the Lancair 200 — an aerodynamically efficient side-by-side two-place machine that could cruise at nearly 200 mph on a 100 hp Continental O-200 engine. Most of Lancair’s extensive airplane offerings, of which more than 2,100 have been delivered, have been piston-powered. The Evolution was not the company’s first turbine when introduced in 2010, but it was the first airplane to be designed without the company’s founder at the helm. Fortunately, Lancair continued Neibauer’s legacy of producing speedy pieces of art with the Evolution. Today, there are about 70 turbine-powered Evolutions flying.

If you have dreamed of owning a turbine Evolution but don’t quite have the $1.5 million or so to get there, you can now buy an Evolution Piston for a lot less and still get terrific performance. If you find yourself ready for an upgrade later on, unless you decide to step up to a jet, there is no need to go through the emotional process of giving up the airplane you own. You can simply sell the Lycoming engine, hang the Pratt & Whitney up front, and continue to fly in the airframe that has become a part of your family. The Evolution provides a path of ownership from a lower-cost, piston-powered version to a higher-performance turbine while using the same airplane.

The Evo Piston is based on exactly the same composite airframe as the Pratt & Whitney-powered Evolution. The only difference is the section in front of the fire wall. While it’s in the Experimental category, the design and manufacturing of the Evolution is on par with what you would expect from a certified airplane company. Designed using various computer-software products to optimize performance and accuracy, the composite components that make up the beautiful Evolution wings and fuselage are all laid up and baked in computer-controlled ovens at the Lancair factory in Redmond, Oregon. The process produces consistency in the products, and there is strict quality control for each component.

As a customer, you would come to the factory for two weeks, building your Evolution in a highly structured, supervised process. At the completion of those two weeks, the shell of the airplane is complete and mounted on the wheels. Then, the airplane is moved out of the Lancair factory and brought to a professional build shop, which assists you in building the airplane. To satisfy the FAA’s “51 percent rule,” you would have to commit to spending about one week per month at the build shop for about seven months or so before you could bring the airplane home.

One benefit of having an Experimental airplane designed with computer software is that modifications, upgrades and new options can be added quickly, even major modifications that would take certified airplane manufacturers years to complete. For example, the control input for roll in early Evolution airplanes was excessive, particularly at higher speeds. Lancair modified the ailerons to solve this problem. Flying the Evolution Piston, my impression was that the controls were perfectly balanced.

Lancair also recently introduced “rough service landing gear,” or RSLG, which allows the airplane to land on unimproved backcountry airstrips. Another benefit with the new gear was an increase in the max gross weight to 4,550 pounds. However, with the wider tires you lose about 10 knots in cruise, according to Lancair.

Another recent modification was the addition of a BRS parachute, which comes standard with the kit. However, customers can opt out of the $80,000, 75-pound safety option, should they wish to do so.

Even though there is only one cabin door in the Evolution, I found it easy to get into both the front and the rear seats. However, when in the left seat, it was difficult to access the door latch, which is located behind the backrest.

The Evolution’s seat is extremely comfortable. During a previous turbine Evolution flight, I tested its comfort for more than three hours without any pressure points on my body. However, the rudder pedals put my feet at an uncomfortable angle. The only time I felt that way, however, was when I had to access the brakes, so it was only a nuisance during taxi and no problem during takeoff, climb, cruise, descent or landing.

I hit the push button to start the electronically controlled Lycoming, and it spun right up. Being a perfect Southern California day with temperatures on the ground at 72 degrees, I asked my demo pilot for the flight, Lancair’s director of business development, Kevin Eldredge, if this was typical. Eldredge claims it’s just as easy no matter what the conditions are like, including hot starts.

The run-up was equally simple. It consisted of pushing the throttle up to 1,800 rpm and letting the systems check themselves. A light illuminated through the process, and it switched itself off once the run-up was complete. A power change would cancel the run-up procedure.

I added 25 degrees of flaps for takeoff, the recommended setting, and rotated at 75 knots. We were light with around a half tank of fuel, 300 pounds of people and very little baggage. Targeting 105 knots in the climb, I saw 1,500 fpm. At around 1,000 feet agl, I brought the flaps up and lowered the nose to a 140-knot cruise climb speed.

While Lancair and Lycoming have worked hard to eliminate the overheating issues, there is still some work to do. At around 9,000 feet, we had to lower the nose and make some adjustments to get rid of a yellow TIT indication. Keep in mind, this is the first airplane with the Lycoming configuration, so the next one may be problem-free. 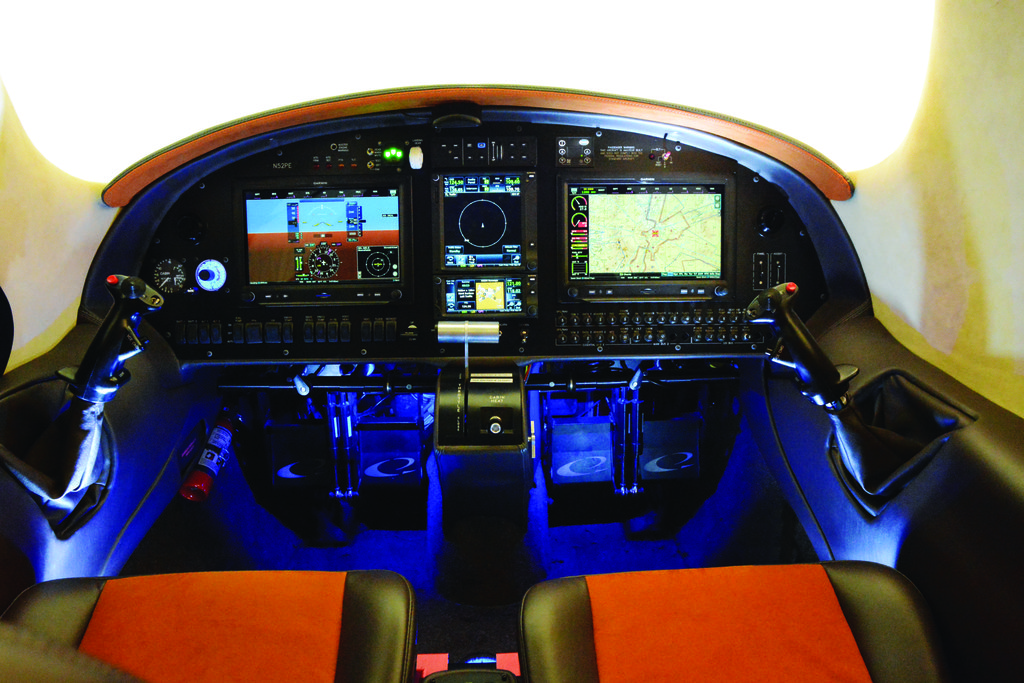 Once level at 17,500 feet, I reduced the power only slightly to 34 inches to check out the speed capability of this sleek carbon bird. Burning 22 gph, we saw 223 knots true. Eldredge claims he has seen an additional 10 knots at 21,000 feet, the sweet spot for the airplane.

Unlike most four-seat airplanes, the Evolution is pressurized, eliminating any need for oxygen cannulas or masks (unless the pressurization fails, that is). At the service ceiling of 25,000 feet, the cabin is a relatively comfy 9,000 feet. At 17,500 feet, we were sitting pretty inside a 3,000-foot cabin.

While the iE2 burns a tremendous amount less fuel than the PT6 that rockets the original Evolution through the skies, the fuel capacity is the same for both airplanes. Having 168 gallons in the tanks gives the piston model ridiculous range capabilities. During the evaluation flight on the coast of Southern California, I punched in the code for Hilo International Airport (KITO) on the east coast of Hawaii to see if we could make it, just for the heck of it.

At our altitude of 17,500 feet, we were, of course, headed in the wrong direction for a VFR flight, but we were just proving a point. We had the power pulled back to around 30 inches of manifold pressure and were burning just 11.9 gallons while getting 206 knots groundspeed. Somehow, we had a slight tailwind despite our west-southwesterly heading — our true airspeed was showing 202 knots.

The Garmin G3X showed our estimated time en route from that altitude and location as 10 hours and 10 minutes. We would have made it to the Big Island with about two and a half hours worth of fuel left, had we taken off with full tanks and burned 15 gallons during the taxi out and climb. I was tempted to say, “Hey Kevin, let’s go and enjoy some snorkeling and macadamia nuts!”

Once I had checked out the cruise performance, Eldredge showed off the emergency descent capabilities of the airplane. Had the G3X been able to show the rate of descent, it would have been right around 5,000 fpm (the maximum is 3,000 fpm) as we dropped out of the sky from 17,500 to 7,500 feet in two minutes and seven seconds.

I played around with the beautiful handling of the airplane for a while, making steep turns, slowing it down, and playing with stalls before heading back to Camarillo. Like its turbine sibling, the airplane felt very stable in flight with benign stall characteristics. It was easy to land.

Lancair offers a variety of options for the Evolution. While our airplane had the Garmin G3X Touch, the G900X (essentially G1000 for Experimentals) is also available as a $60,000 option, albeit only with the TruTrak autopilot. There are also anti-ice boots available. With the Experimental certificate, options are endless. For example, some customers have added heated seats and a potty.

The kit price for the Evolution Piston without the engine, avionics and paint is $410,000 for an approximate ready-to-fly cost with a builder-assist program of $895,000. That may seem like a lot for an Experimental four-seat piston, but with pressurization, exceptional range, load-carrying and speed capabilities, and the abilities to make modifications and upgrade to a turbine later on, the Evolution Piston is a terrific choice.