Part of the job of the pilot in command is the recognition and reduction of risk in the cockpit. Lightspeed Aviation, makers of some of the most popular headsets on the market, are helping pilots recognize and reduce risks with the introduction of the Delta Zulu headset. This active noise reduction (ANR) Bluetooth-enabled headset gives the pilot the ability to customize its auditory acuity with the help of an app, and it also has a built-in carbon monoxide detector that provides an auditory warning if there is CO present in the cockpit.

The company—based in Oswego, Oregon—describes the Delta Zulu headset as a “safety wearable.”

An App Makes It Possible

Lightspeed Aviation has been producing ANR headsets since 1996. With each headset, the technology advances. In the case of the Delta Zulu, the device features Kanari smart alert technology that measures cabin carbon monoxide levels and provides an audible warning to help keep the pilot and passengers safe. The free Lightspeed app allows the pilot to also check the CO sensor data visually during flight and review it later if they want to.

The App also makes it possible for the user of the headset to fine-tune the device to meet the wearer’s hearing needs. Unfortunately, hearing loss is a common experience as pilots age, and very rarely is it uniform in both ears.

To adjust the headset, the app uses a built-in audio equalization system called HearingEQity. The user engages in an automated 12-frequency hearing test (similar to one given by an audiologist, where you are asked if you hear a tone) through the Lightspeed app. HearingEQity sets the level in each ear of the headset to address the individual hearing profile, thus compensating for any variations.

The Lightspeed app also has functions that will likely be useful in the training environment, such as the ability for the pilot to record radio conversations, playback transmissions, draw diagrams, and archive flight recordings for post-flight briefing. These recordings can be reviewed on your phone or mobile device.

Lightspeed adds that “Delta Zulu features Bluetooth wireless technology with A2DP technology enabled cell phone communications and stereo music streaming along with alerts from aviation apps,” so you can be entertained, yet maintain situational awareness on those long flights. Delta Zulu also comes equipped with ComPriority, which automatically lowers the volume of any auxiliary device when there is a radio or intercom transmission.

For the pilot who utilizes many electronic devices during flight, Delta Zulu has an Ultra Accessory Connection (UAC) plug, allowing the user to connect to other devices directly from the headset for charging, data communications, and auxiliary audio.

As high-tech and evolved as Delta Zulu is, the headset does not need to be paired with a smart device to work, says Eric Landry, the director of marketing for Lightspeed Aviation.

“But the app unlocks capabilities and personalization that helps you expand your flying freedom,” Landry says. “The headset will detect carbon monoxide without using the app. If the pilot does not have an iOS device, using a friend’s iOS device for a one-time HearingEQity test will save the pilot’s customized hearing profile in their own Delta Zulu, and the Lightspeed app is no longer needed.”

Carbon monoxide—a by-product of internal combustion—is a silent killer of pilots. It can leak into the cockpit through cracks in firewalls, engine manifolds, or faulty door seals. Because it is odorless and tasteless, a pilot may not realize the danger until it is too late. Delta Zulu provides the pilot with an automatic auditory warning, letting the pilot know that CO is detected, and how much there is in relation to parts per million. As the carbon monoxide increases, the warnings become more frequent. Just an FYI, the reading of 10 to 50 parts per million will result in a warning caution level.

I took Delta Zulu into the air over the last week to evaluate it. The first thing I noticed was the comfort factor. Over the years, I have tried several full-ear coverage headsets. Like many pilots, I started my career with the student-pilot-friendly David Clark headset and eventually upgraded to ANR designs.

The first test for the Delta Zulu: “Would the stainless steel headband interface well with my baseball cap that still has the button on the top?” The answer was yes, it did. It was also one of the lightest aviation headsets I have ever worn. According to Lightspeed, Delta Zulu weighs in at 14.9 ounces and the headband was designed to follow the curve of the human head for “more comfortable distribution of weight and side pressure.”

The next step was to adjust the ear seals. They are smaller than the ones on the David Clark or Bose headsets I’ve worn, and tapered to hug the wearer’s face. I tried the headset with both sunglasses on and sunglasses off—because that can make a difference in headset fit—and in both cases, the ear seals covered my entire ear and stayed in place even when I chewed gum. They were also comfortable enough that I did not really feel them during the 2.3 hours I spent in the air.

Delta Zulu comes in silver with copper badges on the ear cups—and that is your only color option. The color of the headset is probably not going to be an issue for most pilots—it certainly isn’t for me—since aviation headsets are about hearing protection and situational awareness.

Talk to Me, Delta Zulu

The activation and volume control on Delta Zulu are user friendly. I appreciated the annunciation on startup, telling us we didn’t have a CO leak in the cockpit. The volume on the headset is adjusted with slider switches.

The microphone was easy to adjust, and according to my copilot—as well as ATC—my transmissions were easy to understand. I did not have to make too much of an adjustment to get the microphone in “just the right spot,” as can happen with other headsets.

I was impressed by the clarity of sound coming through the headset. The transmissions were very crisp.

The unit also gives you an auditory update on battery level. The headset can be powered by rechargeable lithium-ion batteries or AA batteries in an easy-to-replace battery pack.

If you have ever accidentally left a battery powered device on and found the batteries dead when you returned, you will appreciate this: Delta Zulu has Lightspeed’s proprietary auto shutoff feature that saves battery life by automatically shutting down the headset power when the unit is not in use.

Plays Well With Others

Sometimes headsets do not work well with other brands—for example, a few years ago I had the experience of trying a new-to-the-market headset from another company that did not play well with David Clarks, which, at the time, was the headset of choice at the flight school where I worked. When I wore the new headset and the client wore DCs, there was an annoying, distracting high-pitched whine in the background. I was wary that there would be interference between the Delta Zulu and my copilot’s headset but there was no such issue.

Delta Zulu comes with a seven-year warranty, which is longer than other headsets on the market, and Lightspeed notes, “The unit is almost entirely made of stainless steel and magnesium with durable cables built around a Kevlar core.”

The only challenge I had with the Delta Zulu is that I would like to have a clip on the battery case/headset interface. The unit came with a piece of velcro for a cord clip, but I am not a pilot who likes to have anything loose in the cockpit. I like relatively heavy things—such as my flashlights, survival tool, and the battery compartment of my headset—to be secured. For the flight, I rigged a strap using a piece of parachute cord I carry for just such an occasion.

Delta Zulu comes with accessories, including a hard-shell carrying case, which will be greatly appreciated if your headset was ever damaged because of poor protection from a soft-sided case and hostile gravity. Also included: a single-port wall charger, lithium-ion battery cartridge, AA battery cartridge, UAC to USB-A cable, a Velcro cord shirt clip, and a set of personalized icon chips so you can distinguish multiple headsets.

Delta Zulu carries a price tag of $1,099 and comes with a 60-day money-back guarantee.

“If you are not completely satisfied with your purchase for any reason, return the product for a full and prompt refund,” says Lightspeed. Delta Zulu is available in different plug configurations: Dual GA, LEMO panel power, and U-174.

Built-in carbon monoxide detector, bluetooth, and its own app, the Delta Zulu packs a punch. 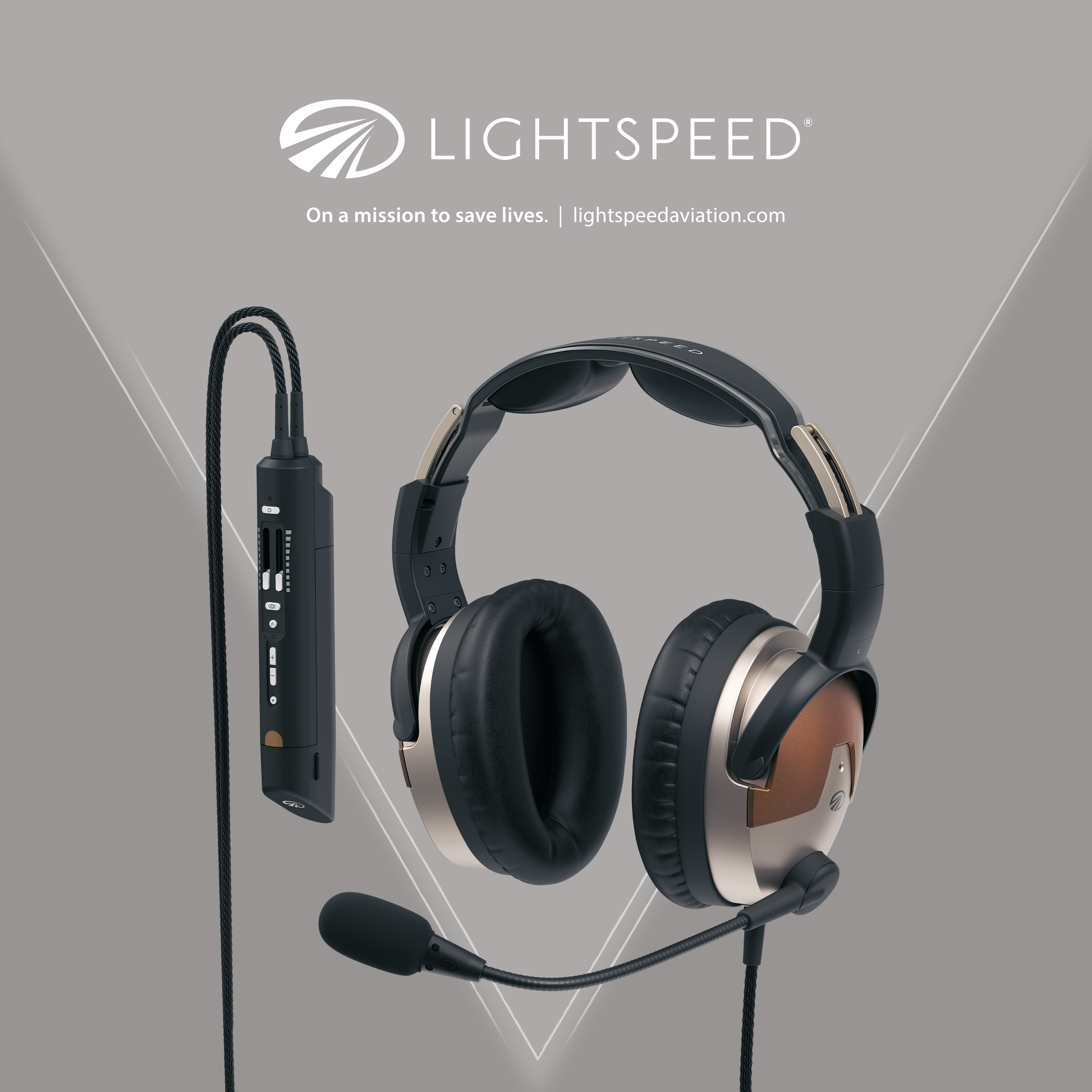