(May 2011) I remember early in my training for my Private certificate, Jack Secor, my instructor, suggested that, while I was out doing my solo flights, rather than just flying around enjoying myself, I could use the time more productively to do some slow flight and practice stall recoveries. That practice and subsequent frequent refresher training have held me in good stead.

In the almost 50 years that I’ve been flying, I have never unintentionally stalled an airplane. I came close — once. It was at Morristown (New Jersey) Municipal Airport, where I was training in the Cessna 150. I was in the pattern doing touch-and-goes. As I lifted off after a landing, the tower called and said that the pilot of an airplane on downwind couldn’t tell if his gear was down or not. The controller asked if I could make a climbing turn and come up under and behind the airplane to see if the gear appeared down. Could I! So I did. But as I was banking and climbing, I was fixated on the gear of the other airplane. Suddenly, luckily, I became aware of the turbulence that foreshadows a stall. With the practice Jack had insisted on, I quickly lowered the nose, reduced the angle of attack (AOA) and got the wing happy again. With everything under control, I reported the gear looked down. But what was more important, I had learned how easily a distraction can get you into trouble.

According to the FAA, almost a third of all fatal accidents during the last 10 years occurred during maneuvering flight. The definition of maneuvering flight isn’t limited to buzzing, aerobatics, formation flying, aerial work and stalls and spins, but is any type of flying close to the ground including pattern work.

In order to pass the knowledge exam — and the practical for the private and the commercial — you need to understand or at least be able to regurgitate the book explanation of what happens when the airplane stalls. The Practical Test Standards for both the Private and Commercial certificates require a demonstration of recoveries from both the power-off and power-on stalls.

That’s fine as far as it goes, but from anecdotal evidence I’ve learned that many pilots, unless the instructor conducting a flight review requires them to perform stalls, never intentionally stall an airplane after earning their private certificate. (The biennial flight review requires only an hour of ground and an hour of flight with the tasks at the discretion of the instructor. It doesn’t require any exposure to stalls.)

I’ve heard that during flight reviews stalls are sometimes glossed over with the excuse of preventing damage to the engine or airframe. Often there’s less emphasis on basic airmanship during a review in order to focus on instrument procedures or the latest avionics.

When was the last time, with sufficient altitude, you held the control wheel fully aft after the stall break to see what would happen?

OK, here’s an easier question. When was the last time you practiced slow flight?

If in reading this, you’re developing an uncomfortable feeling in the gut, then you really do need to understand exactly what’s happening when an airplane stalls and get some hands-on experience in stalls and stall recovery.

Have you ever watched from the ground as someone practiced stalls? The airplane noses up and then gently dips down. The airplane by pitching down is actually attempting to recover from the stall on its own, and in most airplanes used for training, if you continue to hold back pressure, the airplane will begin to recover and then pitch up and stall again.

When the wing stalls, the airflow over the wing is disturbed, and as it flows over the horizontal stabilizer it no longer puts as much downward pressure on the tail of the airplane, causing the nose to pitch down. It’s not nearly as dramatic from the ground as it seems to be from the cockpit. Part of that, I think, is the psychological fear that’s been instilled in us by the idea of “stalling,” when we don’t really understand what’s happening aerodynamically.

Stalling an airplane is no big deal. Certainly the airplane doesn’t care. It’s the sense when the nose drops that we’re falling that gives us an understandably unpleasant sensation. And on top of that, in order to get the wing flying again we have to move the control wheel forward. But since we’re already heading downhill, our instinctive response is not to want to ask for more nose down.

You remember, or should, that an airplane stalls when the angle of attack, the difference between the chord line and the relative wind, exceeds something on the order of 17 degrees. The chord line is a line drawn from the leading edge to the trailing edge of the wing. That’s maybe a bit more technical than we need. The angle of attack is simply the difference between where the airplane is going and where the relative wind is coming from. It’s important to understand that, although the relative wind is exactly opposite the direction of flight, the direction of flight is not necessarily where the airplane’s nose is pointing. It doesn’t matter how fast or slow the airplane is going, whether it’s climbing or diving or even if it’s flying inverted. And therein lies the rub! If the angle of attack is more than the critical angle, the airplane will stall.

Some pilots — to their dismay — have had trouble accepting the fact that an airplane will stall at any airspeed and in any attitude. This lack of acceptance has caused more than a few pilots not to recognize why buzzing can have dire consequences. Picture this: You’re diving toward sunbathers on the beach. In the dive the angle of attack is relatively low. But then, when you reach the bottom of the dive and begin to raise the nose, the airplane is still moving toward the ground but with the nose raised. The angle of attack has increased — despite how fast you’re going — and when the difference between the chord line and the relative wind exceeds the critical angle of attack, the airplane will stall — and likely much more violently than you’ve previously experienced. Unfortunately, without sufficient altitude to recover from the stall, you’re now stuck between the laws of aerodynamics and a hard place. You’ll more than likely make a bigger splash than you’d intended.

Concentrating on sunbathers can be distracting, but there are many more mundane operations that can also be distracting. An interruption during a preflight inspection can lead to missed items. A disruption during an approach to landing has been the cause of a number of gear-up landings. A distraction during maneuvering flight — the sunbathers on the roof of the dorm during an approach to Morristown Airport, a request to check another airplane’s landing gear or an attempt to take air-to-ground photos — all can be the precursor to a stall/spin accident. When we think about it, the potential for distractions is ramped up when we’re in the pattern getting ready to land. We’re busy watching for traffic, setting the flaps, changing power settings, lowering the gear, adjusting the prop, checking fuel on the fullest tank, planning the approach, talking on the radio and checking the windsock.

With all the distractions in the pattern, it’s not surprising a lot of stall/spin accidents occur close to the ground. A typical scenario involves a cross-control stall that often occurs when a pilot, turning base to final, flies through the extended centerline and, instead of abandoning the approach and performing a go-around, steepens the bank while adding back pressure or tries to “rudder” the airplane back toward the centerline. The resulting cross-control stall will be too close to the ground to recover.

When distractions raise heads, airmanship is the skill we use to prevent a stall and the possibility of a subsequent spin. With the advent of moving maps, autopilots and other technological aids, airmanship is suffering. In a sense, as instructors we’re to blame, since as our students begin instrument training we admonish them to ignore the sensations they get from their senses and fly the instruments. But that applies only when there’s no visible horizon; at other times, “flying by the seat of the pants” still prevails!

The reason we practice stalls and slow flight is to teach ourselves to feel what the airplane is trying to tell us in terms of how close it is to the stall. Preventing a stall requires both a physiological and intellectual understanding of a stall. The intellectual is needed to understand the aerodynamics involved in causing the stall (i.e. the angle of attack); and the physiological is needed to “read” the physical signs the airplane gives us as it approaches the stall. Flying an airplane at minimum controllable airspeed is excellent practice to hone your perception of how the airplane feels when it’s getting close to a stall.

The importance of learning to sense when the airplane is approaching a stall is obvious, when you consider that almost 40 percent of fatal stall/spin accidents begin below 250 feet above the ground, which precludes a successful recovery. That’s why stall practice and slow flight help to teach us instinctively when an airplane is running out of lift and needs help with either an increase in airspeed or a reduction in angle of attack.

As we get closer to the stall break, airframe buffeting results from turbulence caused by the disturbance of the airflow over the wing as it impacts the elevators and is felt in the control wheel.

At some point the requirement for spins was eliminated from the curriculum. It seemed more students were being lost by practicing spins than encountering them in their flying. In response, the decision was made to stress the recognition of the aerodynamic indications of the approach to a stall to prevent a stall in the first place, since an airplane can’t spin unless it’s stalled.

The wings on most of our airplanes are designed so the stall begins at the wing root, closest to the fuselage, so that the ailerons continue to be effective into the stall. Nevertheless, if a wing drops in an approach to a stall, it’s because that wing has lost lift and stalled. Although the instinct is to use the aileron to raise the wing, it’s important to use the rudder rather than the ailerons.

A spin starts when one wing is more deeply stalled than the other, typically the result of an uncoordinated stall. So, when you use the aileron to raise the wing, it only further increases the angle of attack on the stalled wing and the roll becomes worse.

While recovering from a stall requires relatively little altitude, recovering from a spin requires much more. The final authority on spin recovery for your airplane is in the Pilots Operating Handbook (POH), but the acronym PARE provides a typical recovery procedure: P = power (throttle back to idle); A = ailerons (neutralize the ailerons); R = rudder (full rudder opposite the direction of spin); and E = elevator (yoke forward past neutral).

It should go without saying that it’s important, if you’re rusty on your airwork, to schedule some time with an instructor who is comfortable with stalls and spins. As a reminder, practicing spins is considered an aerobatic maneuver, and the FARs require you to wear a parachute — unless the spin training is part of the training toward a flight instructor rating.

As the habit of practicing slow flight and stalls has atrophied, we’ve attenuated some of the basic airmanship skills that have made us safer pilots. Do yourself a favor; quit stalling. Go out and do some stalls. 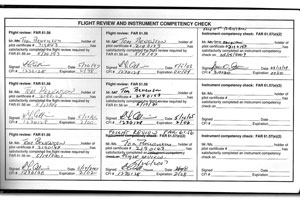