Few things are more important than being at the right altitude on an instrument approach. In the abstract that sounds easy, but in practice I often see pilots make mistakes in this most unforgiving aspect of instrument flight.

Most of my flying is in aircraft with moving maps, as part of either a GPS or a glass cockpit, so my observations are biased by what I see in these airplanes. Oddly, I recall fewer issues in airplanes equipped with just a VOR receiver and a DME receiver; watching a DME count down is unambiguous, resulting in fewer mistakes.

Modern electronics present more information, making it harder for pilots to focus on the data most relevant for each phase of flight. Most glass-cockpit aircraft in the United States don’t have DME. They do have GPS navigators that can substitute for DME, but pilots often don’t look at that information, or they fail to display it.

Most problems I see fall into three categories. The first is correctly determining the step-down altitude. I’m surprised at how cavalier pilots are about finding the altitude for an approach segment. Many will glance at a chart for two seconds, pick an altitude (often the wrong one) and then confidently proceed.

Whatever happened to the principle of double-checking the critical few things that can kill you? If your life is worth anything — and I’m sure you believe it is — it’s worth spending more than two seconds determining and confirming each altitude.

A frequent problem is misinterpreting the altitude to descend to when flying a course reversal at the initial approach fix (IAF). But, almost always, pilots choose an altitude that is too high, so in practice making this mistake is not a major safety hazard. Also, pilots generally choose vectors instead of their own navigation, and hence they don’t need to fly a course reversal.

But a surprising number of pilots misinterpret the step-down altitudes when reading the approach chart. The most frequent error is choosing the altitude for the next step-down fix, meaning they will be flying too low along the approach segment, which could be fatal. Generally, I see pilots make this mistake when looking at the profile view (or side view), which displays segment altitudes immediately adjacent to and just before the next step-down fix. I don’t know why pilots sometimes misinterpret that symbology.

Segment altitudes appear in two places, and I don’t recall a pilot ever misinterpreting the segment altitudes displayed in the plan view, which is essentially a bird’s-eye view of the approach. So, like a carpenter who knows to measure twice before cutting, pilots should look twice — once at the plan view and once at the profile view — to confirm that they know the correct altitude for each approach segment.

The second major problem I see is that pilots often don’t use high-resolution data sources when flying an approach. The most common error is using a moving map to identify when a pilot has reached the beginning of the next segment and can descend to the next lower altitude.

What’s wrong with that, you ask? Well, nothing if you have the map zoomed in sufficiently to truly tell when the aircraft has crossed a fix. But often I see moving maps zoomed out to view the entire approach. When viewed that way, it’s difficult to know precisely when a fix is crossed. As a result, pilots often start descents early, before crossing a fix.

A better method is to display the active flight plan on a GPS and refer to it as you approach each fix. Generally, the distances are displayed to the nearest tenth of a nautical mile, making it easy to determine when you’ve crossed the next fix and can begin your descent.

A related problem is that pilots often use the moving map for lateral course guidance, rather than a CDI needle or an HSI course pointer. The issue is that when using just the map, pilots generally have no idea how far left or right of course they are. With the map zoomed out, the airplane symbol might seem close to the line, even while the CDI or HSI is indicating off-scale and the aircraft is outside the obstacle clearance area. Word to the wise: Use your CDI needle or HSI course pointer as your primary source of information and the moving map as a backup to confirm you’re on course.

A third problem is pilot technique and skill in descending and then maintaining an altitude. Historically, many instructors have taught students to “dive and drive” at each step down of a non-precision approach, but the FAA has determined that the high descent rates used for this contribute to an increase in accidents. Hence, the FAA now recommends that stable descent rates be used on all non-precision approaches.

So, for each approach segment, pilots should estimate a required descent for that segment and then descend at that rate. For example, at 90 knots, you’ll fly 1.5 miles every minute. If the segment length is three miles, divide that by 1.5, and you’ll have two minutes to descend. If you need to lose 1,000 feet on that segment in two minutes, use a 500-foot-per-minute descent rate.

Some pilots like to circle the target altitudes on their charts so they’re easy to spot. Others write down a list of fix names and target altitudes. Whatever technique you use, be sure — dead sure — of your target altitude before you begin your descent.

Max Trescott is the 2008 National Certificated Flight Instructor of the Year. Based in Palo Alto, California, he publishes aviation books and software, including Max Trescott’s GPS and WAAS Instrument Flying Handbook_ and_ Max Trescott’s G1000 Glass Cockpit Handbook_. He teaches in Cirrus and other glass-cockpit airplanes and in Lake amphibians._ You can learn more about Max and contact him at g1000book.com_. _ 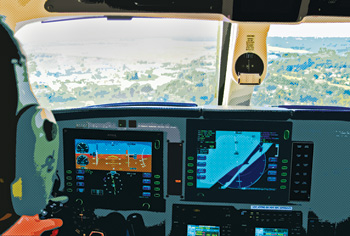