I realized at some point during my instrument training that airplanes are a lot more like horses than they are like cars, and pilots can learn a lot by approaching their machines with this in mind.

As a child I rode horses — a lot. We had four of them on our property. As a rider you learn early that the horse is always testing you — trying to eat grass to see if they can get more reigns. Once they have them, they try and keep them. Horses are notorious for sucking in air and bloating up their stomach just at the moment you try to tighten the saddle, so that several minutes later, when you try to mount up, the saddle is loose and you go sliding off the other side. They test you by pulling their noses away and trying to reach down and eat grass, as much to see if you have the skills to stop them as to satisfy any real desire to eat. They will ride straight toward a low overpass to see if you have the skills to turn them or stop them before you get knocked off. Horses are playful but mischievous.

At some point, the riding stopped but the lessons remained. Flash forward 25 years. My private pilot training was OK. All in all, it was pretty good. I really liked my instructor and I felt she was teaching me everything I needed to know. But that is one of the hardest things to know as a young student pilot — is my instructor really any good? She was a bit younger than I was at 23-years-old, and on track to be a United Airlines pilot. She was teaching to build time. It wasn’t until I met my instrument instructor, Richard, that I realized there were holes in my skills. A lot of them.

Richard and I worked a lot on a light touch. Trimming the aircraft to climb, for example, and letting go of the yoke completely to copy headings, frequencies and clearances. To prove the value of this skill he’d sometimes ask me to initiate banks with rudder alone, and then recover in the same way, utilizing the secondary effect of the controls to emphasize a delicate touch. I use these same techniques with students today. A lighter grip on the controls is essential to feel the proper trim of the aircraft, and there is no benefit to a full fist grip on the yoke of a light airplane. Three fingers will do the trick, prevent over-controlling, and tune the pilot in to the trim of the airplane.

This is one point where an illustrative analogy can be drawn. Here, anybody with equestrian experience can benefit. Horses are similar. Hold on loosely, get the animal moving and then stay out of the way. A rider who holds too tightly will definitely over control the horse. A rider that continues to kick and kick and kick will also not fare so well. Planes are similar. Cars are very different than this and, unfortunately, they are what we are most used to. Constant inputs, a little left, a little right, work in a car. Take your foot off the gas and the car stops. This is not the way an airplane behaves. An airplane behaves much more like a horse. And they test you the same way, too.

You don’t need to be an experienced rider to get what I’m trying to say here. The horse wants to eat grass, and so does the airplane. I think of this every time I ask a pilot to level off at, say, 3,300 feet and, after getting there, we slide back down to 3,100. Moments later they ask, “Do you want me to go back?” and I’m thinking, “Who’s flying this plane?” and I’m saying, “Don’t let the horse eat grass!” My students know what this means.

So, where am I going with this? Why go on this way about horses, cars and airplanes? For one, because I believe it’s a powerful analogy for anybody who has ever ridden a horse. As an instructor I am always searching for language and experience that connects with students, and this one always does. More so if they have some experience as riders. But even if you don’t you can still comprehend the takeaways. In airplanes a light grip is essential. If you hold on tight you will lose connection to the trim and over control the airplane, I promise. Solutions to this include threading a pen over your second and third fingers and under your first finger and your pinky for some time while you fly. With that done you can’t squeeze too tightly, or it will hurt. Also, flying around with rudder alone for some period of time as a skill-building exercise will help you develop a feel for trim and a light touch on the controls.

Finally, you can benefit from thinking of the airplane as an animal that wants to test you. Maintain a positive mental attitude toward your P.I.C. responsibility and a positive control of the airplane at all times. It may seem arbitrary, but I judge a pilot that can’t get to and stay on an altitude or heading we both know they intended to be at. This mindset will imbue your flying with a discipline that will reflect in good centerline discipline, good heading and altitude control, and, over time, the ability to think in front of the airplane. All because you didn’t let the horse eat grass. 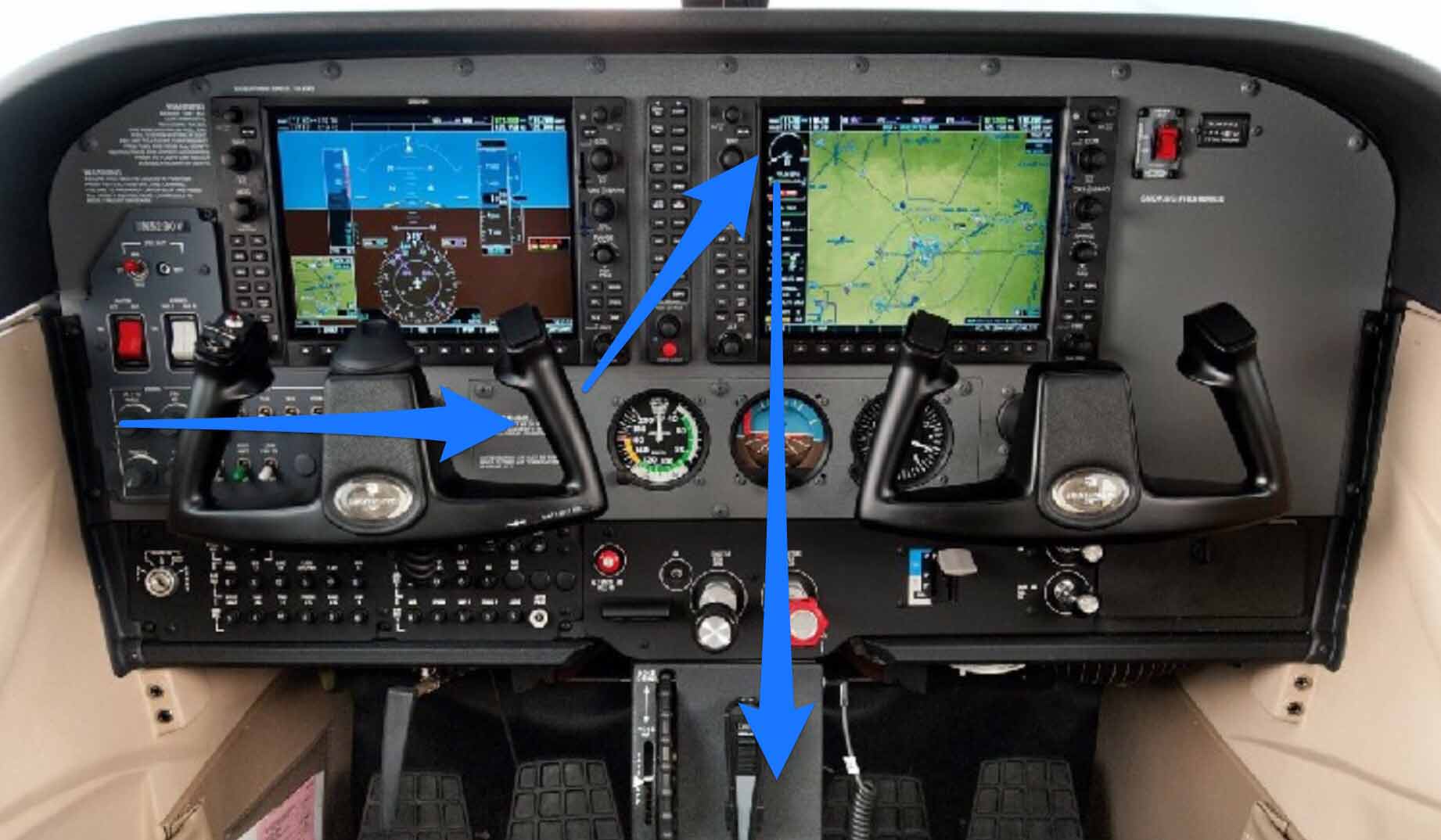