One challenge for instrument pilots is that the rapid change in technology found elsewhere in our lives has invaded the cockpit. In the past, pilots had it easy when flying an ILS (instrument landing system) approach. By dialing in the right frequency and keeping the needles centered, a pilot could successfully fly an approach even using radios he or she had never seen before.

That said, flying a GPS approach can be so complicated you could write a book about it. So I did; much of what you’ll read here comes from my Max Trescott’s GPS and WAAS Instrument Flying Handbook.

Technically there is no such thing as an “LPV approach.” Instead, LPV approach is just one of several minimum types that can be flown on a GPS approach with a WAAS-capable, instrument-certified GPS. LPV stands for “localizer performance with vertical guidance,” meaning it’s similar in precision to the localizer and glideslope of an ILS approach.

LPV approach minimums, usually 200 or 250 feet agl, are typically the lowest available on a GPS approach. Other minimum choices may include LNAV/VNAV, LP, LNAV and circling. You can usually ignore the LNAV/VNAV minimums, since LPV minimums are almost always lower. LP, or localizer performance, minimums are like a localizer approach; the angular guidance narrows as you near the runway and there’s no vertical guidance.

LNAV, or lateral navigation, mini-mums are used to fly a series of stair steps until you reach a minimum descent altitude (MDA). They are the only straight-in GPS minimums that can be flown with a non-WAAS, approach-certified GPS. Circling minimums permit you to circle to land on any runway, except those prohibited in the chart notes.

Flying an approach to LPV minimums starts long before you reach the approach. Your preparation before leaving the ground should include checking that your GPS database and charts are current — and if your charts are on an iPad, checking that the iPad is fully charged. You’ll also want to contact Flight Service for any WAAS notams. If flying in oceanic or remote areas, the FAA requires that you run an FDE prediction program, available from Garmin and other companies, to check GPS satellite coverage.

En route, you can check RAIM if you’re planning to fly to LNAV minimums. But RAIM can’t tell you if you’ll have sufficient signal quality to fly to LPV minimums, so there’s no need to check it if you plan to fly to LPV approach or LNAV/VNAV minimums. Incidentally, if you do a RAIM check and it fails, you may want to play the lottery.

The current GPS availability for nonprecision approaches in the continental United States is more than 99.99 percent, meaning on average, if you check RAIM 10,000 times, you’ll fail to get RAIM only once!

En route, brief the approach by reviewing the chart. Verify that GPS is in the title of the approach and not RNP (required navigation performance), because those approaches cannot be flown with a WAAS-capable GPS. Then set all frequencies including the one for weather at your destination.

One common mistake I see is failure to check and set the “kill switch.” That is the switch that determines whether the CDI or HSI course needle is displaying course guidance from a VOR receiver or a GPS. Leave it in the VOR position when flying a GPS approach and you could get killed.

Once you’ve properly set up your equipment, flying to LPV minimums is like flying an ILS. As you intercept the glidepath, reduce power and slightly lower the nose to descend. Keep the needles centered as you would for an ILS, and when you reach the decision altitude listed on your chart for LPV minimums, decide whether to land or to fly the missed approach. Don’t continue flying level at LPV approach minimums while looking for the airport. If you don’t see the airport upon reaching LPV minimums, you must immediately initiate a climb.

Before flying an approach to LPV minimums in poor weather, practice doing it in clear skies. After all, the life you save may be your own!
_
Max Trescott is the 2008 National Certificated Flight Instructor of the Year. Based in Palo Alto, California, he publishes aviation books and software, including Max Trescott’s GPS and WAAS Instrument Flying Handbook

and Max Trescott’s G1000 Glass Cockpit Handbook. He teaches in Cirrus and other glass cockpit airplanes and in Lake amphibians. You can learn more about Max at g1000book.com._

Keeping Track of Your Altitude 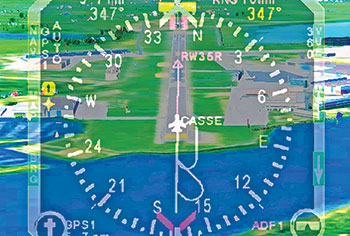